Born and raised in the beautiful Hawaiian Island of Oahu, artist Randy Au came to Southern California for the good weather and to pursue a fine art career. Studies include Biola University with Grant Logan and California State Fullerton with Jerry Rothman and John Stokesbury where he earned a B.A. in Fine Art. He established the Flying Cup Clay studio in 1987 and became a fulltime studio artist in 1992. He presently splits his time between the studio; being the ceramics instructor and Assistant Director of the Visual Arts Conservatory at the Orange County School of the Arts in Santa Ana, California since 2002; and other various teaching and workshop opportunities.

He was a contributing member of the Santa Ana, Artists' Village Taskforce in 1993 as well as the "Mayor's Art Strategic Plan" and the Santa Ana Council of Arts and Culture. As a guest curator for the Santa Ana, John Wayne Airport, he organized "Orange County Contemporary Clay" (2007-2008); an exhibit of 28 local ceramic artists. He was featured as the guest artist with the California Japanese Ceramic Guild at the 2012 Nisei Week celebration in Little Tokyo; invited to show at the "Ceramic Biennale" in 2013 at the American Museum of Ceramic Art in Pomona; and "Pedagogic Clay 2015" at the Frank M. Doyle Art Pavilion, Orange Coast College, Costa Mesa.

IN THE COLLECTIONS OF: 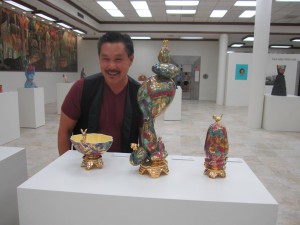